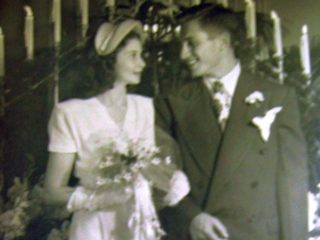 On the 28th of July 1946, in Chattanooga, Marjorie Ruth Blumberg married Ellis Katz. She had never asked how much money Ellis had [which was none], how much he made [which was little], or how they would manage….she never did… all she ever asked was love and caring. 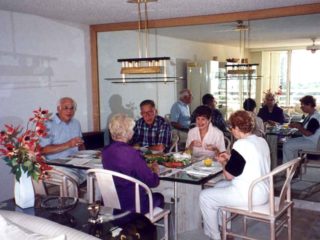 Their first home was a small one-bedroom garden apartment in Hampton, VA. Hampton was the site of the National Advisory Committee for Aeronautics {later NASA) where Ellis was an Aerodynamics Scientist. They were happy there and,without a car, they walked and walked and walked: to “downtown” Hampton, to the little inlet on the Hampton Roads, where, for a while, Ellis docked a small sailboat, to the Hampton Institute (an all-black college) to see performances of operas, plays, and concerts. On some occasions, they would get a ride with friends to Williamsburg or to the Blue Ridge mountains.

The young couple made close friends in Hampton who have remained dear throughout the years: Phyl and Mel Savage and Harriet and Larry (now gone) Gale…who now live in Boca Raton FL. Both couples were here to celebrate their 50th wedding anniversary in 1996. 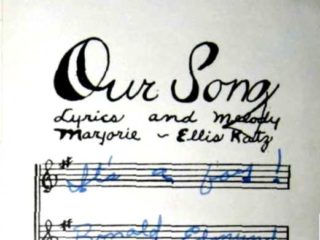 On 28 Feb 1950, son Ron, was born and Marjorie, ever the artist, created “Our Song” invitations announcing the special moment. Marjorie’s maternal instincts came to the fore like a thunderbolt; how she cared for and loved that little boy! The couple had bought a 49 Ford and moved to a two-bedroom apartment in nearby Newport News. 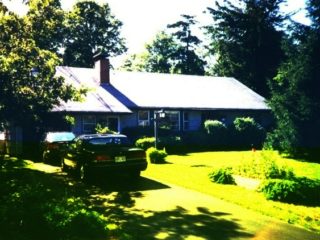 In May of 1951, Ellis was offered an attractive job at Fairchild Guided Missiles in Wyandanch, NY…So the couple, with son Ron, traveled to Long Island and rented a Levittown house for a year. It was the first time Ellis gave in to the idea of watching TV…the house had a built-in unit. One year later, they moved to a rented house in Islip, a community far out from the city and where the couple felt they would want to live for the rest of their lives. So they began to build a home in Islip and, each day, Marj and Ron (in his little red pedal car) would go the several blocks to the building site and watch the construction. It became a lovely home and the family moved in by the fall of 1954. 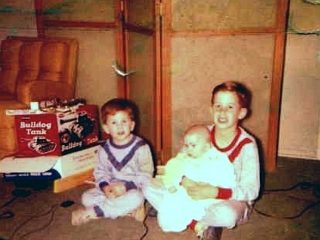 Unfortunately, by that time, Fairchild had begun to hit the skids and, by early 1955, Ellis was enticed to accept a job offer from North American in Downey, CA. Also, by that time, Marjorie was “with child”….to become Danny.

While Ellis traveled to California in May ’55 to find a home and begin work at North American, Marjorie with Ron traveled to Dalton, GA (her parents had been living there for years as proprietors of a jewelry store) to give birth on 24 June to second son, Daniel Marshall.

Whittier is a lovely Quaker-founded town to the east of Los Angeles. The family lived near a beautiful WPA-constructed park that was like the family’s playground. Very soon Marj and Ellis made good friends of Florence and Harold Ehlers and some of Ellis’s co-workers. Harold, to this day, is one of their closest friends and living in San Luis Obispo.

On 20 Sep ’58, Marj gave birth to third son, Paul Elliott, as happy a “happening” as could ever be. Grandparents, Bob and Ethel Katz, were overjoyed to be present at that wonderful moment. God had been good…the family was happy and healthy and active. There were excursions (often with the Ehlers) to the beaches, to the mountains and snow, to Sequoia National Forest, to Big Sur, and to Mexico. Ron became the leading pitcher for the baseball Little League of Whittier and, later, in Encino. 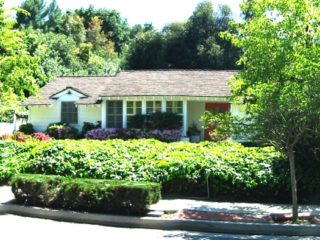 Of course one of the happier advantages of being in California was the nearness of Grandmom and Granddad Katz and sister Florence and her family. On all holidays and other occasions, Granddad Katz would pull up beside their house and begin unloading all the bakeries and “goodies” Grandmom loved to feed her family. Marj could never get enough of Mom’s “perugins” (sp?)and, the boys, her brownies..

Ellis had gradually grown in his work at North American, but Hughes in Culver City made an offer not to be refused. However, Culver City was a long commute from Whittier and, so on Labor Day of 1960, the family moved to their present home in Encino. 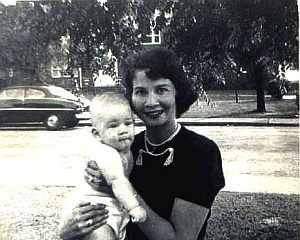 At the time, Ron was 10, Dan 5, and Paul 2. Marj was always at home to see that the boys were provided for, to see them off to school, to prepare their lunches, to be home for them when they returned from school, to take them to the park, to prepare the family dinner. Dinnertime was very special for the family; it was more than a time of delicious food…it was also a time for conversation about what had happened at school, what happened in the city or country, and a time to reflect upon events. It was most special on Friday nights (the “Shabbat”) when Ellis would arrive home early from work, and the family would dress for dinner in the Dining Room, and Marj would light the candles and say the blessings. Those beautiful moments remain with us all.

On 28 July 1996 our Sons and Daughters gave Marjorie and Ellis the most wonderful and elegant 50th anniversary dinner dance at the Calabasas Country Club. Dear friends from our earliest married days had come from Virginia, Georgia, and Florida to celebrate with us .

It doesn’t get any better than this!!!!